Results: How agile are you? 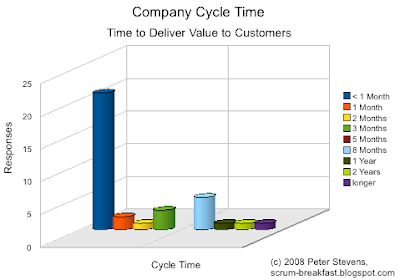 After getting a good response to the sprint duration poll, I thought it would be interesting to ask the question at a somewhat higher level. How long does it take your company to deliver business value?

I was surprised how slowly people responded to the poll. The sprint duration poll produced 20 responses almost immediately. This time, maybe 10 people had voted, despite high traffic and even after I published it on the scrum development list.

So I published it on the Xing Agile Methods forum and the Xing Forum English Project Management Lounge and got some more responses. All in all, 35 votes: 77% claimed 3 months or less, 23% reported 8 months or more. A very small sample, but perhaps some interesting trends can be found in the data…

First of all, I think there are more results from agile companies than non agile companes, so while the proportions within the groups (<5>=8 Months) may well be OK, I do believe the slow group is in reality the larger group. But how to prove this? And why the low reponse rate?

Could it be that most people don’t understand the relationship between speed and success in the market? Next time I will be sure to add the responses “Don’t know” and “Don’t care” (perhaps, “not an issue” would be a bit less provocative).

Or perhaps is this is an issue which companies focussed on agile are aware of, but people from waterfall companies really don’t know — or maybe just don’t want to admit — how big the difference is between themselves and their more agile competitors…

10 Things to tell Management about Scrum and Agile

Who wants to try a Personal Daily Scrum?