How agile are you? 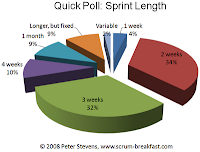 Following the discussions both elsewhere and on this blog about sprint duration, the questions poses itself – what is the preferred sprint length? So I ran a poll.

And the winner is… 2 weeks.

According to this very scientific survey (1 week on my blog, 228 Visitors, 50 votes), the most popular sprint duration is 2 weeks, followed by (early leader) 3 weeks, which lost by one vote.

The final results are:

How long should the sprint be? There are many right answers, some of which argued for longer sprints:

But most argued for shorter sprints:

Very short sprints, i.e. 1 week are appropriate for very short projects, say 1 month. To do a 4 week project in 1 sprint, or even 2, does not leave much opportunity for feedback.

3-week sprints have become very popular over the last 12-18 months. Before then most teams considered them odd 😉 Seriously, it’s a recent change for most teams

And the closing word:

Thanks to Dmitry, Ben, Ash, Ilja, Paul, Kiran, Paddy, and Brett for their comments, as well as to everyone who voted!

What is the Agile Way to Adopt Agile?