#SGUS: Jeff Sutherland: What does Management Do Under Scrum

Scrum is Lean with a Turbo-Charger

But please don’t call it a game. Call it An Interactive Simulation on Optimizing the Creation of Value.

At Jeff Sutherland’s CSM Course in Zurich, I witnessed him lead the class through Joe Little’s Scrum Penny Game. It teaches the importance of small batches and optimizing the whole. I was really intrigued by the game, and thought it had much more potential, so I revised it and tried out the first incarnation at the Open Space in the Scrum Gathering. I wanted to see a) if the game (and especially the revised game) had the same impact on the assembled experts as it did on me, and b) get feedback for improved or alternative versions.

I wanted to emphasize principles that management could implement to improve value creation:

So I set up the game as follows: 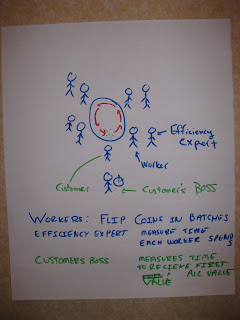 I deliberately identified the timers as ‘efficiency experts’ rather than ‘managers.’ Better not to antagonize the people who will influence the adoption of Scrum… 😉

The Props: per team, 20 coins, consisting of

(During the briefing, I do not mention the values of the coins).

Constraints: Just so that the game is not too easy, there are a few constraints:

We played several rounds. As there were only enough people for one complete team, We did some things sequentially, which I would have preferred to do concurrently (with the teams in competition with one another).

(Note: I only entered the totals for the last round on the table below). 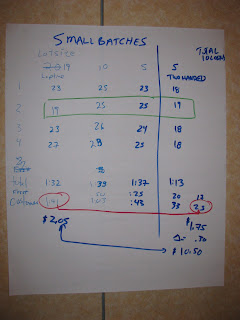 Round 1 establishes the baseline. It also established competition between the team members (the one lefty was very proud that his time was the best). Note that the sum of the individual times != the total time measured by the customer’s boss. Some workers blamed this on the slow reaction of the customer to accept the coins. There were also gaps because the measurements don’t account for transit time.

Round 2: Before starting, the team noticed that a coin was missing. This was not intentional, but a great addition: Where is the missing functionality? What does this say about acceptance testing? This round showed the improvement of reducing the lot size from 20 19 to 10: Processing Time went from 1:41 to 1:03, a 38% reduction. Although that 3 of 4 worker’s times were slower in round 2 than round 1, the time measured by the customer was substantially better.

Round 3: There was some disbelief about the effects of the batch size, so the third round was made with smaller batches still: 5 instead of 10. Individual performance was about the same, but the customer time improved again, declining to 0:43, a 32% reduction from round 2.

At this point, the team accepted the importance the first principle: produce in small batches.

I asked the team if anyone noticed that they had one hand tied behind their backs and pointed out the rules are there for a reason, but improving performance is not usually one of them.

Round 4: Same configuration as round 3, but team members may use both hands. Time to produce full customer value: 33 seconds, a further reduction of 23% from the previous round.

Do Less, but do the right thing!

I asked the team how much value they had produced. The sum of all the coins was $2.05. I asked the customer to pick the 10 coins with the most value (the quarters and dimes). This reduced the processing time a further 30% (down to 23s), but only reduced the value delivered by 15% (to $1.75).

As I write this, I realize that if the team had processed the pennies and nickels instead of the quarters and dimes, the value produced would have been $0.30. 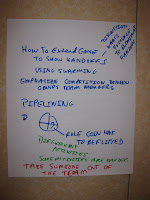 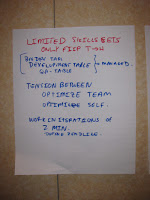 After playing 5 rounds, we had a spirited discussed on the lessons of the game and other lessons which could be learned from the game, and how to use the game to address other issues, such as:

I would to thank everyone who came to the game for their help and energy, and above all for the great discussions afterward. There will be a picture here in a moment. If you use this game (uh, simulation) or modify it do drive home some other points, please leave a comment ( or a link to your own blog) so that this simulation can develop its full potential! Thanks.