Mastering the Recession with Lean, Agile and Scrum

The Product Owner is Part of the Team 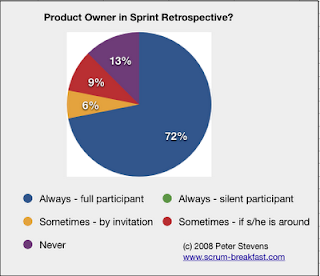 I am also pleased to report that no one invited the product owner but did not let him participate. I recently advised a team which did just that, with the justification he is not part of the team. While there might be some justification for this in the Daily Scrum, I believe getting good and timely responses from the product owner is one of the big challenges in the team. Not letting him talk smells of a power struggle and is not motivating fo rthe P-O in any case – why should he come if he has nothing to say?

The poll is still open and you can download the results directly from doodle. As I write this, there are 32 responses. Although those are enough votes that I have some confidence in the trend, it doesn’t exactly qualify as a large sample. So if you haven’t voted, please do so! If the the trends reverses, I’ll post an update.

10 tips for doing Scrum when you’re decentralized, part-time or doing other stuff you’re not supposed to do

What is the Product Owner Camp in Switzerland?