Last November, I started a quick poll on Story Size, Team Size, and Sprint Success. I wanted to explore that variables of team size, sprint duration, average and maximum story size, and whether there is any correlation between between these parameters and team success.

I received 81 responses (presumably from 81 different people and hopefully from 81 different teams, but I have no way of checking this). 78 claimed to be doing Scrum, one claimed XP, and two did not reveal their preference. This article presents a first look at the results. 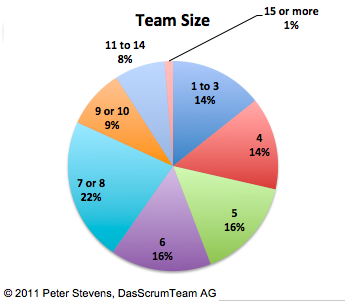 These results were something of a surprise to me. More than half (63%) of all respondents indicated they did two week sprints. Only 1/3 that number reported 3 week sprints. In May 2008, I ran a quick poll on sprint length, and the answer came up even: almost exactly 1/3rd each were doing 2 and 3 week sprints, another third where spread around 1 week, 4 week, 1 month and variable. 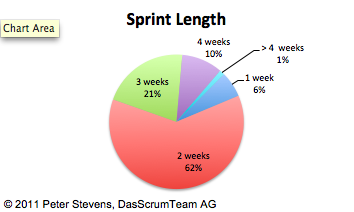 Obviously the poll tells us that something has changed, but not why this change has happened. And in all honesty, I am not sure this represents a real change. The previous poll had only 34 respondents and even 81 is not a huge number.

On the other hand, the influence of XP on the Scrum community has grown, there has been a lot of discussion on “Scrum-But” since my original poll on the Nokia Test, and queuing theory tells us that shorter sprints with more stories per sprint should be more predicatable.

Number of Stories per Sprint 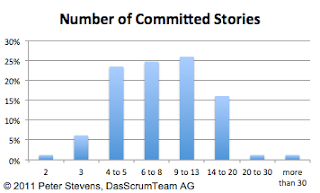 During my first Scrum Project as ScrumMaster, I made the observation that if my team took on a story that was 40% of their total capacity for the sprint, their chances of not completing the story were, uh, “excellent.” In the mean time, I have conversations with people who suggest 25% is better maximum. I was surprised to see that there are teams out there who will take on a story that represent 50% to 100% of the team’s capacity for the sprint! 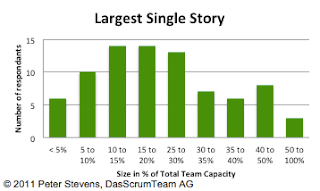 Success is a tricky thing to measure. For this poll, I define success to mean, ‘the team delivers that which it commits to.’ This does not say anything about the productivity of the team. I once saw a 12 person team double its performance in story points after being split into two 6-person teams. But the team had been delivering what it promised, so by this definition it was a successful team.

I choose this measure for success for two reasons. 1) Delivering on commitments is a fundamental skill of a Scrum team. It builds trust between Implementation Team and Product Owner. 2) It is relatively easy (uh, possible) to measure in this context (“the light’s better“). 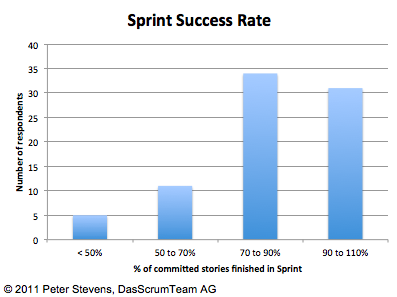 Looking at this graph, you might get the impression that a 70 to 90% success rate is OK. I don’t think so. The goal is to be a reliable partner. Yes, a team needs the safety to fail once in a while, especially when they just start out with Scrum, and if you focus too much on the goal of certainty, then other things, like performance and creativity, may suffer.

Scrum is Hard to do Well

So I would interpret this data differently. There are teams that are doing well, “successful” and those that need improvement:

…but I think we’re getting better!

It looks like 38% are doing pretty good Scrum, delivering on their commitments, and 62% could be doing better. This compares favorably with the 76% of all respondents who scored 7 or fewer points in the 2008 Poll on the minimal Nokia Test.

The interesting question is what are the signs of a good (or bad) Scrum team? I have been playing with Pivot Sheets and will post some analysis of the relationships between the various factors. (And if anyone is good with statistics and/or has access to better tools than Excel for this purpose, your help would be most welcome!).

Update 6.3.11: Here is the original Poll and the actual data in spreadsheet form. (Don’t use google’s graphical summary of the results. For reasons I do not understand it is not correct).